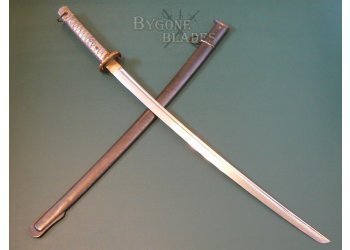 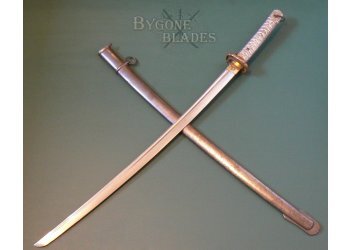 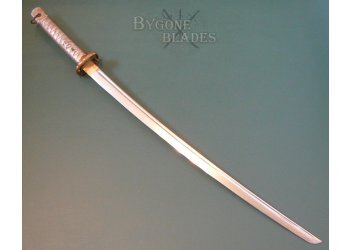 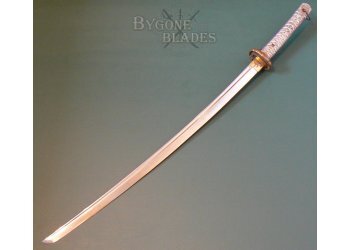 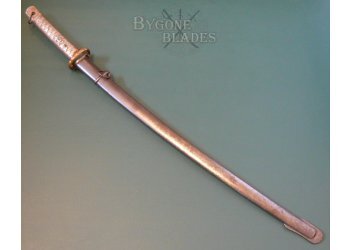 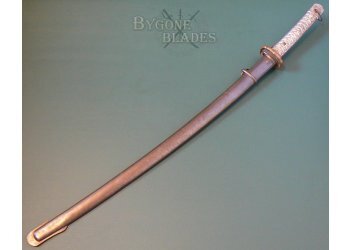 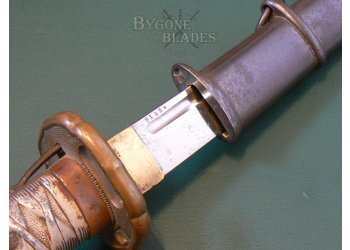 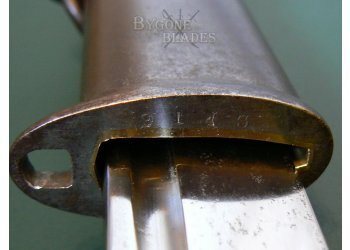 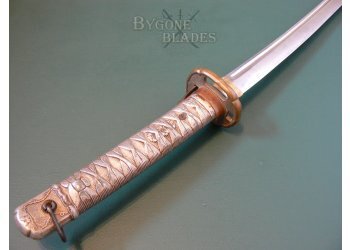 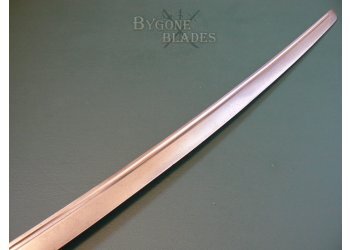 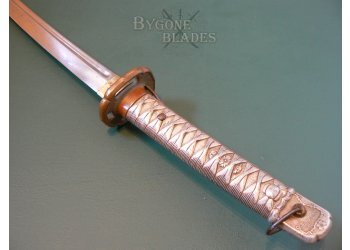 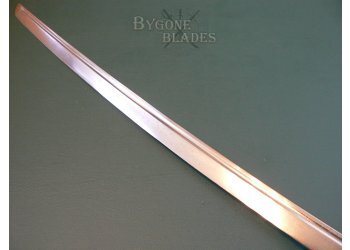 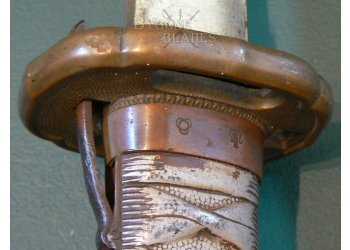 This sword has a cast aluminium tsuka (hilt) with an approximately 10mm thick ornate aoi-shaped brass tsuba (guard). The fuchi is copper and the sword is secured in the scabbard by a top latch, all of which identifies it as being a second pattern sword (the first pattern being the extremely rare copper hilted model). The low, matching numbers on blade and scabbard, 9143 date the sword to between 1937 and 1938.

The 67 cm (not including the habaki) blade is in very good condition, free from rust and tarnish. There are small areas of pin-prick pitting at the tip and some speckling along the blade. The serial number and a Tokyo First Arsenal stamp are clearly marked above the bohi (fuller). These pre-war production Type 95 Shin Gunto were carried by career soldiers, NCO’s of the rank of Sergeant, Sergeant-Major and Colour-Sergeant. Traditionally, these men considered their sword to be their primary weapon. The blade retains its fighting edge.

The cast aluminium tsuka (hilt) has lost its original paint, the wear testifying to its use and service. The copper screw fastening on the hilt has been replaced (or was never there) with a piece of peened iron. The colour of the iron suggests that this was a period replacement, the metal having blackened with time. Interestingly, some Type 95 produced by the Suya company are known to have alternative fixings in place of the copper screw. Some have no fixing at all, just an indent where the fixing hole should be drilled. Replacement copper screws are easily available but I have left this as it came to me. The scabbard latch is in good condition and works well. There is some small movement between blade and hilt.

The steel scabbard is in excellent condition, free from dents and has a great, dark patina. The throat of the scabbard bears a matching serial number, 9143.

Japanese WWII swords are amongst the most copied/faked of all swords and prospective buyers should beware.

This is a great, early production example of a much sought after Japanese NCO’s Type 95 sword that was carried and used by a career soldier in the Imperial Japanese Army.