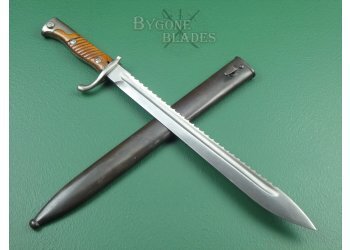 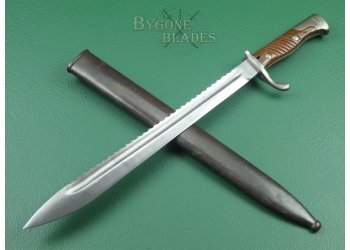 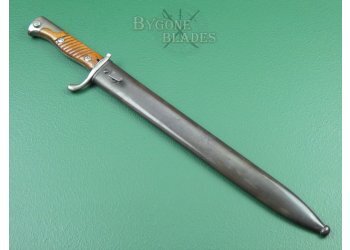 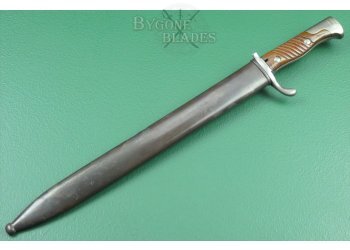 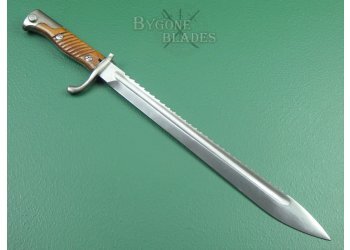 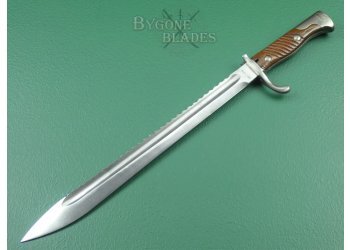 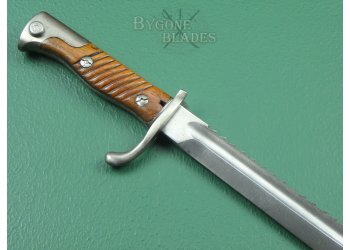 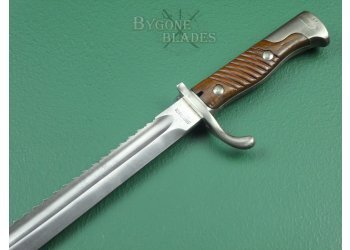 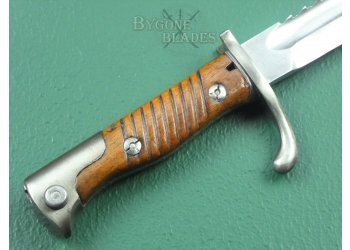 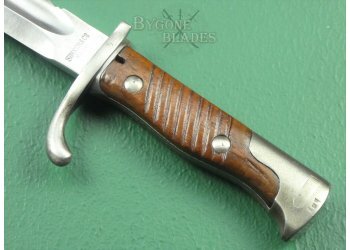 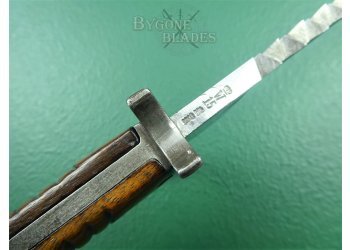 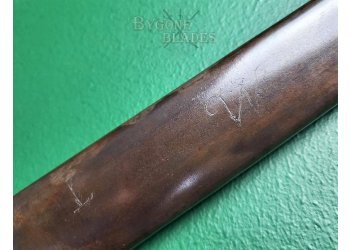 As a result of allied propaganda, which led to the mistreatment of German soldiers captured with a saw-back blade, the decision was made in 1917 to cease production of the saw-back version of the S98/05 and to grind off the saw from those already issued, or to recall and re-issue them to non-front line troops.

The unaltered 368mm single-edged blade has a wide, single fuller below 29 pairs of very sharp saw teeth. The blade which is 26mm wide at the ricasso widens before tapering to a spear point earning it its nickname the “Butchers’ Blade” because of its similarity to such knives. The blade is in excellent condition and has not been sharpened, retaining its blunt factory edge.

The ricasso is stamped with the maker’s details, Simson & Co., Suhl and the spine bears two inspection fractur and the date stamp for 1915 below the crowned cypher of Kaiser Wilhelm.

The hilt is in great condition, retaining its original “high ears” and without a flash guard.

From 1915 onwards, S98/05 bayonets were retro-fitted with a steel flash guard on the back of the hilt to protect the wooden grips. Bayonets were further modified by grinding off most of the vestigial muzzle ring. This bayonet was produced prior to these modifications and escaped the recall, increasing its rarity today. The wooden grip scales are in very good condition and are held firmly in place by the original bolts. The bolts and nuts bears fracture inspection stamps. The press-stud locking mechanism works perfectly and is stamped with an inspection mark. The bright steel pommel bears three different inspection/ownership stamps.

The bayonet is complete with its blackened steel scabbard. The scabbard is in good condition with some shallow dings on one edge and wear to the original finish. The letters W and L have been crudely engraved into the back of the scabbard, presumably by the soldier to which it was issued. The bayonet draws and sheathes smoothly and is held firmly within the scabbard.

This is a fantastic example of an unaltered saw toothed WW1 German S98/05 bayonet.