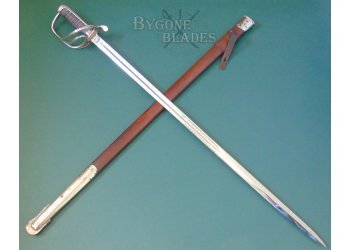 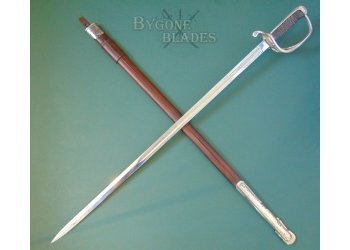 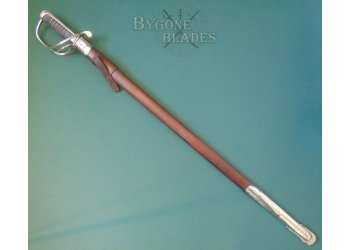 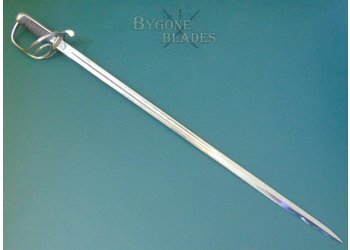 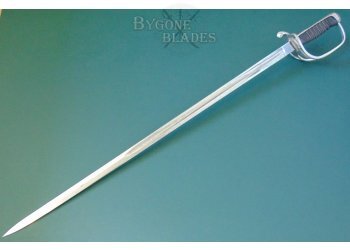 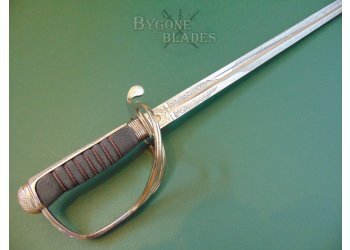 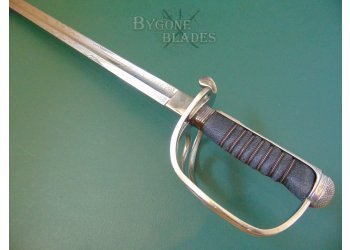 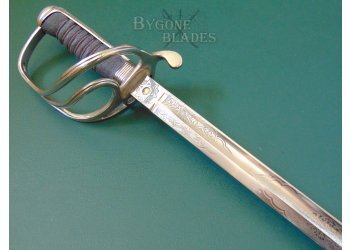 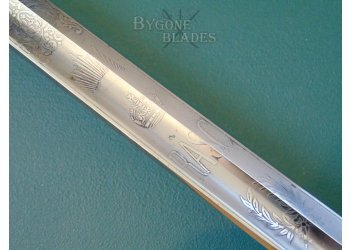 A scarce British Royal Army Service Corps (RASC) officer’s sword. The RASC were responsible for the provision of food, water, fuel and technical and military equipment to the field and barracks. They also oversaw the Army Fire Service. In 1965 the RASC was disbanded and its functions were split among several corps, which themselves later transitioned into the Royal Logistics Corps, formed in 1993.

The 860mm Wilkinson style blade has a flat spine and broad, three-quarter length fuller on both sides. The spine bears a Centre of Percussion arrow and the blade tapers to a sharp spear point. The finely etched blade bears scrolled foliate panels, laurels and the crowned cipher of King George VI. The obverse bears similar scrolled panels, rays and laurels as well as the RASC logo of the corps.

The blade is in very good condition with its original polish and crisp etching. There are mild spots of tarnish towards the point on both sides. The ricasso bears a brass stud containing the word “Proved” over a fleur de lis. This proof disk is known to have been used by Hawkes & Co.

The nickel-plated three-bar guard is in excellent condition with all the plating intact. The back strap and pommel are cross-hatched and the tang is finished flush with a cross-hatched peen. The shagreen grip is excellent and the three strands of twisted copper wire are intact and tight.

The sword is complete with its brown, wood and leather field scabbard. The body of the scabbard is in very good condition. The nickel plating on the steel throat and drag has tarnishing and some loss of plating. The sword sheathes and draws well and is held firmly within the scabbard.

This is a very nice example of a scarce WW2 period RASC officer’s sword.