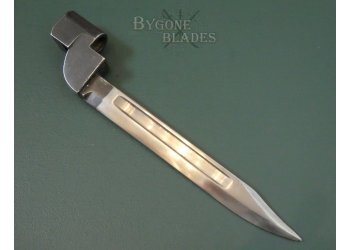 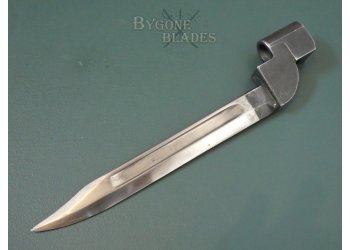 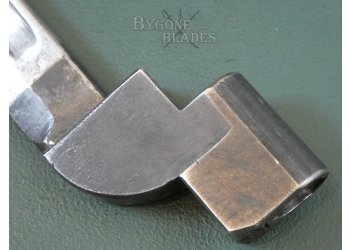 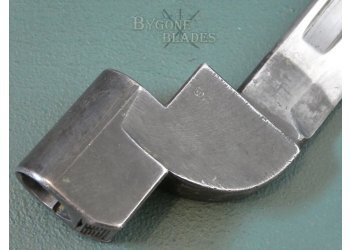 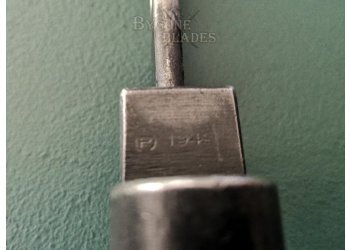 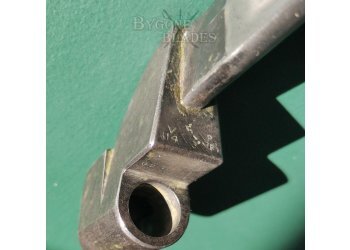 The British No.9 Mk1 socket bayonet was the result of a post-war desire to replace the unpopular No.4 spike bayonet. Initially, the innovative No.7 Mk1 Land Service bayonet was intended as the replacement, but due to safety concerns, the War Department decided not to issue the No.7 Mk.1/L bayonet with the Lee-Enfield No.4 rifle (it was only issued for service with the Sten Mk.V Submachine gun) so the No.9 was designed. In effect, it was the No.4 socket married to the clip point Bowie blade of the No.5 bayonet. This also meant that the No.5 scabbard could be used with the No.9 Mk.1 bayonet. Production commenced in 1947.

From 1947 to 1949, around 200,000 No.9 Mk I bayonets were produced at the Royal Ordinance Factory, Poole. The Poole bayonets are the earliest documented production of the No. 9 Mk. I bayonet.

This bayonet was made by the Poole factory in 1949. The Poole maker mark, a letter "P" inside a circle and the year of manufacture, “1949,” is stamped on the top of the socket block below the muzzle ring. There are several stamps on the front of the block above the blade, these are a V above the number 114, the letter P and below that, the numeral 1 beside a second letter P. The right side of the block bears the stamp B5 and the top of the spring catch bears a Broad Arrow stamp.

The 200mm clip point blade has a rounded spine and single edge. The blade is in great condition with slight marks and scratches consistent with use.