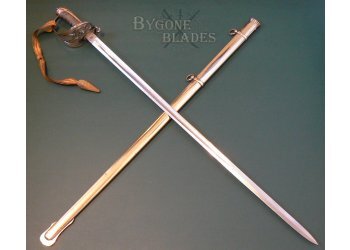 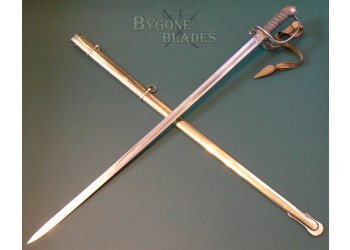 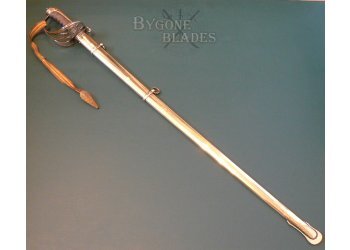 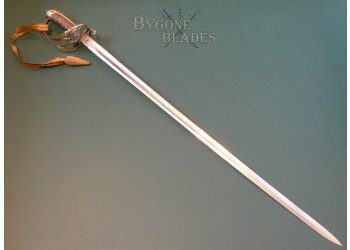 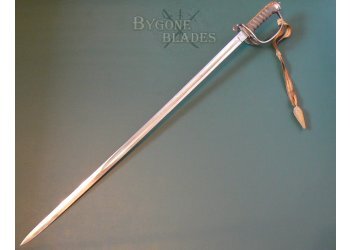 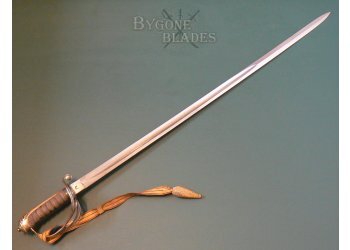 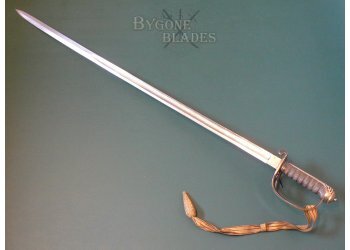 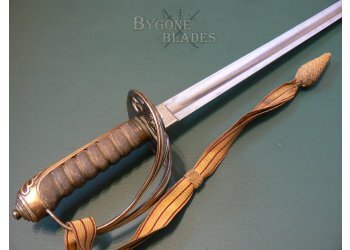 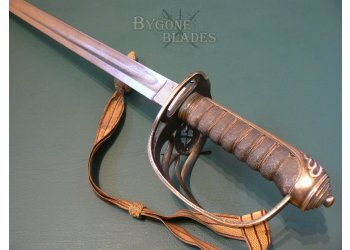 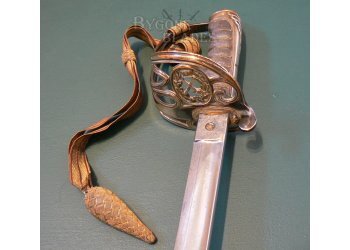 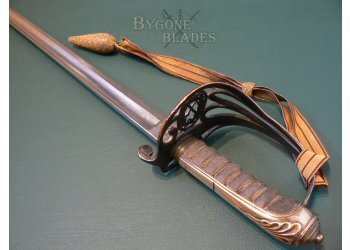 The British 1845/54 pattern General Officer’s sword differs from the infantry officer’s Gothic hilted Pattern 1845/54 sword in that it has the General Officer’s badge of rank, the crossed baton and sabre on the guard in place of the monarch’s cypher.

The 830mm single-edged blade is double-edged for the last 270mm and has a flat spine. A broad single fuller runs for 524mm from the ricasso on both sides. The blade terminates in a spear point. The blade is in very good condition with some wear due to polishing over the years. This is a robust fighting sword, the spine being 8mm thick at the ricasso. The ricasso is 27mm wide and bears the cutlers’ name, Ranken & Co. Calcutta, indicating that this sword was the property of a British General serving in India in the 19th Century.

The solid brass guard is the Gothic 1845/54 pattern that replaced the folding guard of the earlier 1822 pattern swords. From 1845 the guard started to be fixed as opposed to folding although both types of guard were still produced. In 1854 the regulation required that the guards be fixed, although this was not fully adopted until 1860. The guard bears an oval cartouche containing the crowned, crossed baton and sword of General rank and is in very good condition. The hilt is complemented by a gold and maroon bullion knot.

The ray skin grip is in good condition with two of the original three strands of twisted brass wire remaining. The hilt’s back strap has acanthus style decoration flowing into the stepped pommel with a rounded tang button. The blade is firm in the hilt.

The sword is complete with its general officer’s brass scabbard with two suspension rings. The scabbard is in excellent condition but is missing one of the small retaining screws from the top. It is unusual to find these brass scabbards in such good condition as the soft metal is prone to denting. The sword sheathes and draws smoothly and is held nicely within the scabbard.

This is a very good example of a Victorian General officers’ sword.