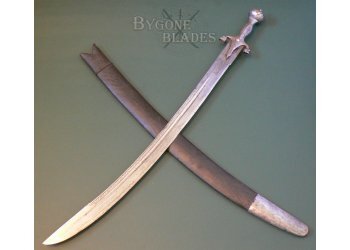 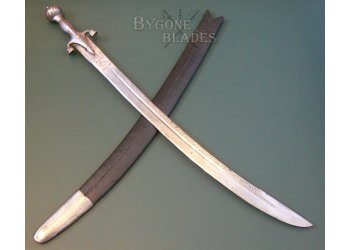 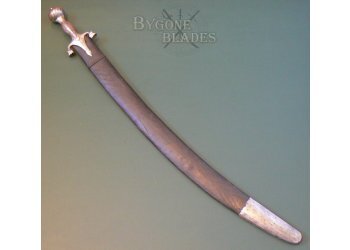 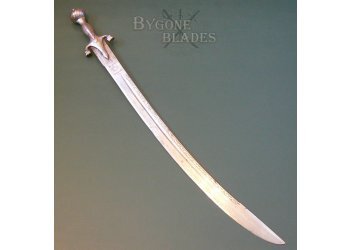 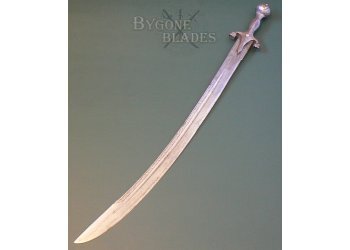 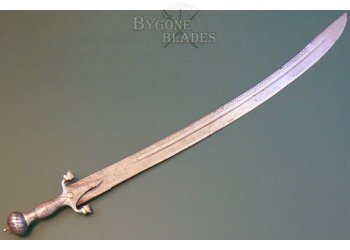 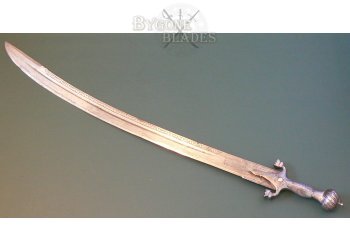 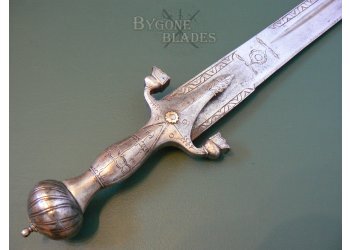 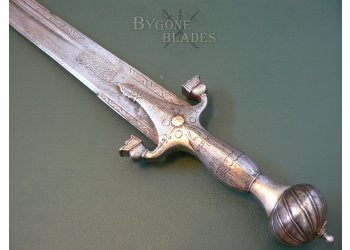 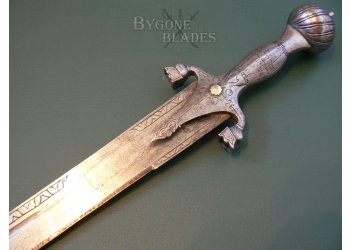 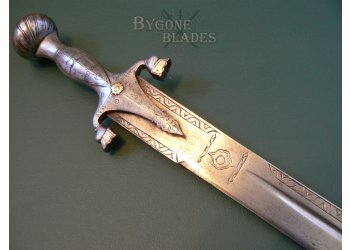 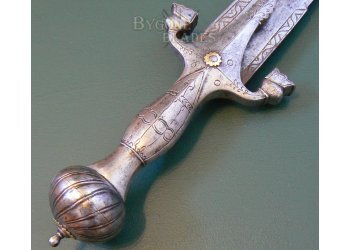 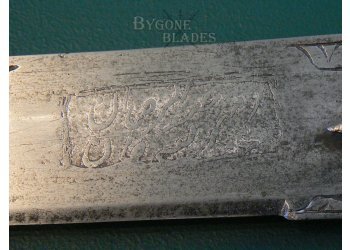 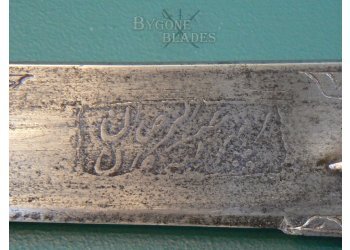 The Pulwar or Pulouar is a single-handed curved sword originating in Afghanistan. It is the traditional sword of the Pashtun people. The hollow, traditionally hemispherical pommel of the Pulwar is said to contain small stones collected from Mecca. Devout Moslems are expected to make a pilgrimage to this holy city at least once in their lives.

This scarce 19th Century Afghan Pulwar has a rare turbaned or ball pommel that contains small stones, which rattle when the sword is moved.

The 750mm curved blade has a thick, flat spine and central fuller. The single-edged blade has a 126mm upper false edge and terminates in a hatchet point. A deeply cut floral band runs below the spine on both sides, also serving to reduce the weight of the blade. It is in effect, a second fuller. I believe the band is a stylised depiction of lotus flowers.

The forte of the blade bears an incised mark resembling a flower between two batons or columns with pointed ends. I have seen this mark on a similar Pulwar, also with a turbaned pommel.

The obverse of the forte bears a cartouche containing Arabic (or Pashtun) script. I have not been able to translate it but I believe that it is either a quote from the Quran, or the makers’ details and date.

The broad, heavy blade is probably Wootz steel although it would require etching with ferric chloride in order to confirm this. The blade is in good condition and retains a sharp fighting edge. There are some small areas of very shallow pitting and age related tarnish.

The steel hilt is of typical Pulwar form and nicely decorated. The engraving on the crosspiece represents lotus stems and the down-turned quillons, lotus flowers. The hilt terminates in a rarely seen ball or turbaned pommel, reminiscent of the turbans and battle helmets worn in the 18th and early 19th Centuries. The turban pommel is finished with a brass sun disc and bud-like faceted skull crusher.

The blade is fixed into the hilt by a steel pin that passes through the tang to secure the blade. In addition, cement-like resin is used to reinforce the pin and hold the blade firmly in place. The pin is decorated with a brass sun disc. The blade is firm in the hilt.

The Pulwar is complete with its original leather covered wooden scabbard with iron chape. The leather is in very good condition and is tooled with geometric designs. The stitching is intact and tight.

This is a beautiful example of a rarely encountered Afghan Pulwar dating from the first quarter of the 19th Century.