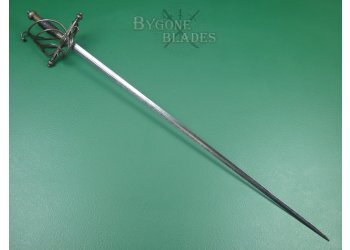 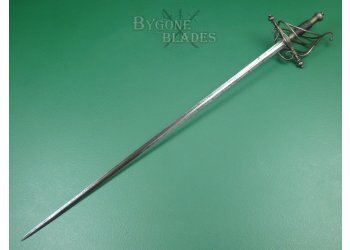 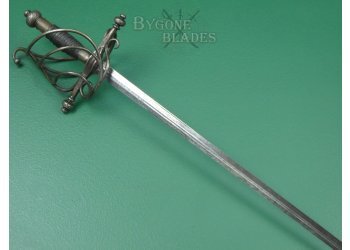 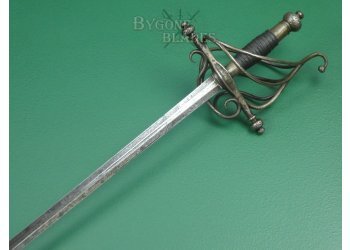 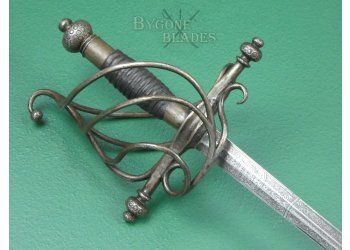 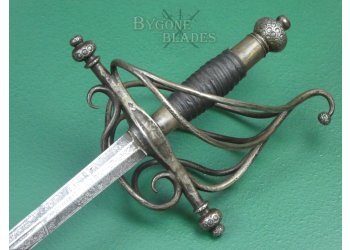 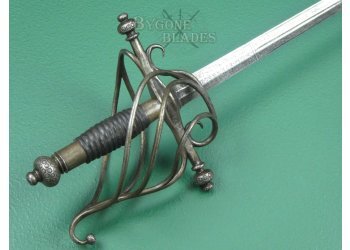 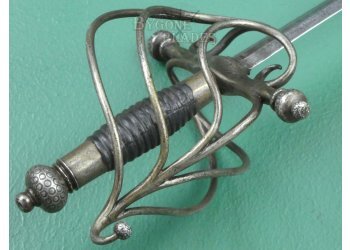 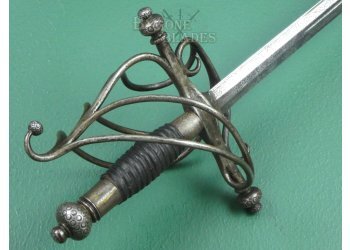 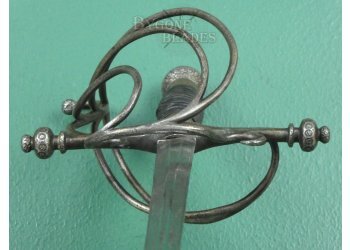 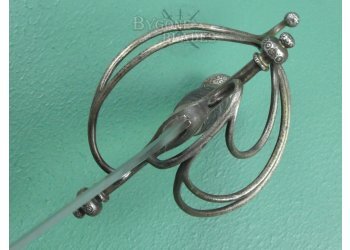 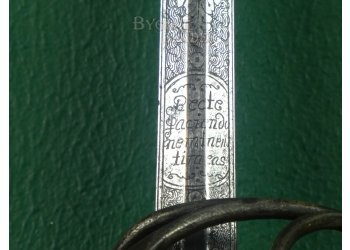 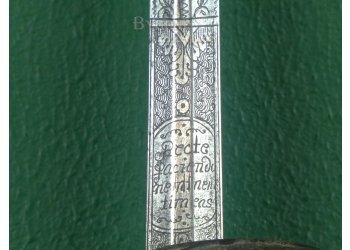 This early transitional rapier is probably from Germany and was probably made in the first half of the 17th Century. The sword resembles a traditional rapier with a slightly shorter blade.

A rapier is a straight, double-edged sword with a narrow blade, designed especially for thrusting. Traditionally, rapiers had blades measuring 100cm or more in length. While the rapier was beautifully balanced and considered excellent for a lunging attack, its length made it cumbersome to wear, resulting in the gradual shortening of the blade. Swords made during this period of change, from rapier to small sword are referred to as transitional rapiers. Early transitional rapiers kept their sweeping barred hilts and merely shortened the blade. Later, the hilt and guard began to change too, resulting in the small sword hilts we see today. The name “small sword” was given to the newly evolved sidearm because it was small in comparison to the large guard and very long blade of the rapier.

The 880mm double-edged rapier blade is traditional in form though slightly shorter. The blade is 23mm wide at the base and has a flat hexagonal cross section with three very shallow 100mm length fullers at the forte – more for decoration than to lighten the blade. The blade is beautifully engraved with scrolled foliage and wave patterns with a zig-zag engraved along the central fuller. Above the foliate engraving are engraved three cross-like symbols which could be a maker’s mark.

A cartouche at the forte is engraved with the motto, “Recte Faciendo Neminem Timeas,” translating as “By Doing Right, Shall Fear No-one.” This was originally a Medieval Christian Knightly motto but was used by several influential European families in the 17th Century.

The blade is in excellent condition for its 370 plus years of age. The engraving is clear and beautifully executed.

The beautiful swept hilt is comprised of rounded iron bars. The crosspiece has ornate urn finials decorated with a design of circles, some of which appear to contain symbols. The urn pommel and terminal of the guard are also decorated with a pattern of circles. The cord and leather wrapped wooden grip is in good condition and the blade is firm in the hilt.

This is a beautiful 17th Century sword. A great example of an early transitional rapier.